Crews are working on a section of the Greensboro Urban Loop near North Elm Street on the northeast side of Greensboro on Jan. 6. 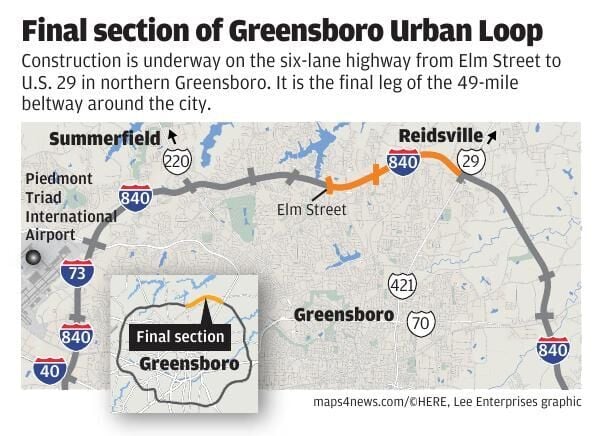 The six-lane highway from Elm Street to US 29 in north Greensboro is currently under construction. It’s the final leg of the 49-mile ring around town.

GREENSBORO – The final stage of the long-planned 49-mile ring road around the city is in its final year of construction, state transport officials say.

“In the next few months or so, people will start to see tracks pouring concrete … from the US side 29 and moving east to west,” Moody said last week.

Construction on the final stretch of the Greensboro Urban Loop – from Lawndale Drive to US 29 – began in April 2018 and costs $ 137.3 million.

This part is expected to open to motorists in the spring of 2023.

The six-lane highway is part of a 16.5-mile project – also known as Interstate 840 – that runs from US 70 in the east to Joseph M. Bryan Boulevard in the west.

“We’re looking at roughly a 10-year project – in four sections – which is a good turnaround,” said Moody.

When connected to Interstate 73 and Interstate 85, the $ 504 million project completes a bypass road that city guides first looked at in the late 1940s.